I'm really getting in to refashioning and reviving clothing to make something new and useable.

First, I used applique to cover a stain. Then I turned a couple pair of gaucho pants that I wasn't wearing into skirts.

My latest refashioning project is turning one of my husband's tshirts into a ruffly peasant top for me.

Usually by the time he gets rid of shirts, they are only fit for the rag bag. This one just didn't fit right and still was in pretty good condition.

An advantage to this shirt was that it's a nice shade of light blue. Score for me! I snatched that thing right up and hauled it off to the sewing room!

I used this tutorial that I had pinned a long time ago. It was pretty easy to follow and the shirt didn't take that long to make.

I can't really tell you exactly how long it took me because I worked on it in small snippets of time--maybe about 1 hour and 15 minutes total? Longer if you count the phone call to my sister to figure out how to do the lettuce hem on my machine! 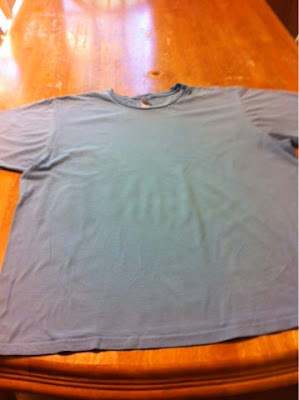 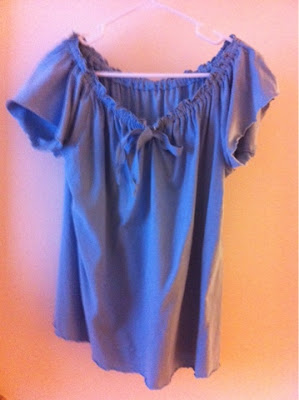 What I Did Today

I always enjoy homemaking posts that detail what that person did in her home that day. These are not boring at all to me. In fact I often learn something new that I can put to use in my own home.

So this post is one of those-- what I did today.

I went shopping late last week so there was meat in the refrigerator that needed to be dealt with before it went bad. I like to go ahead  and prep most meats ahead of time and then freeze them.

So today was definitely a cooking day! 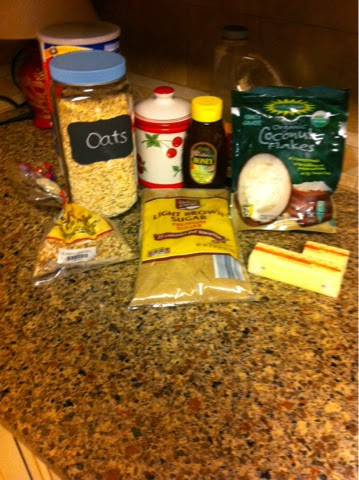 First off, we were out of granola so I made a double batch. We don't eat much cereal-- we don't really care that much for it and it takes several bowls to fill us up! We do like homemade granola though and it's been nice to keep on hand this summer for a cooler breakfast with yogurt and fruit. We've been eating it once or twice a week for a change of pace. 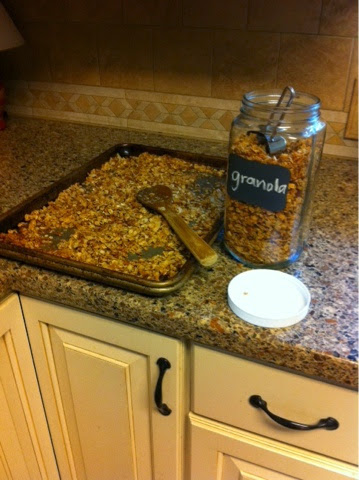 While the granola was baking, I quickly made a freezer crockpot meal-- Italian Sausages with Peppers and Onions. This meal takes just minutes to put together. It's so nice to pull out on a busy day and throw into the crockpot. 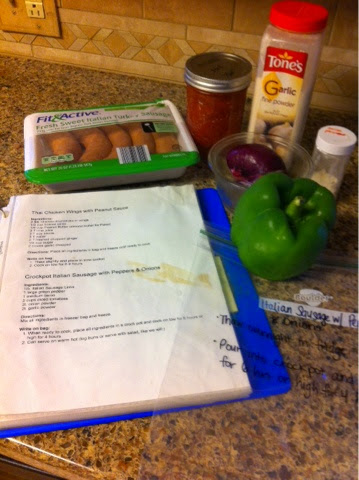 We prefer pork sausage but Aldi only had turkey when I was shopping last week so we'll use turkey sausage this time!

Next up was some ground beef to take care of! I made 8 hamburger patties to freeze. We'll be grilling half of these this weekend and then will have enough ready for another meal later. 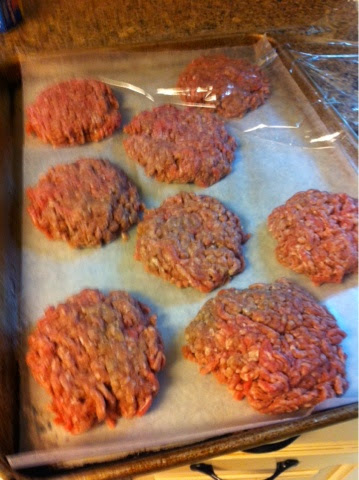 Hamburger patties are super easy to make so it may seem silly to make them  ahead. But to me it makes sense to go ahead and quickly make them up so they're ready when I need them.

We like to eat supper within about 30 minutes of me returning home from work so any prep work I can do ahead makes supper prep and the evening go that much smoother.

I do a load of laundry pretty much every day plus other routine homemaking tasks so those things were also completed this morning.

I also was able to hard-boil a dozen eggs and then run the dishwasher before leaving for work this afternoon.

When I made dinner tonight-- Pork and Veggies-- I doubled the recipe and froze one portion for dinner one night next week.

Andy is working the run-off election tomorrow so after dinner, I packed a lunch for him.

In a nutshell, that's what I did today.

Labels: homemaking, In the kitchen 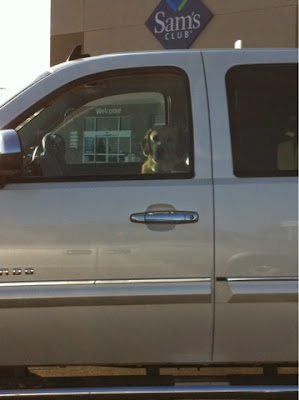 As I pulled into the parking space, I could sense I was being watched.

I turned to the left and this sweet face was what I saw!

Meanwhile, back at the ranch, this pretty much sums up what Rock does all day: 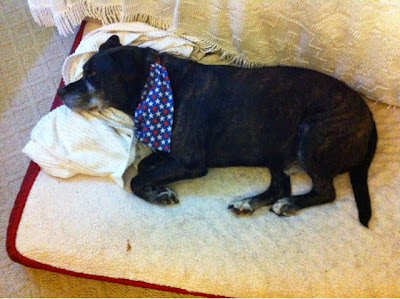 Then he'll go out for a few minutes: 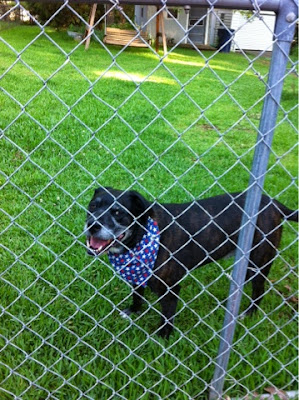 Then back in for maybe a little of this: 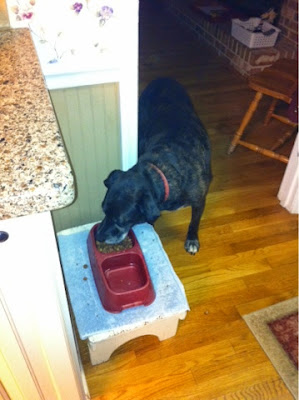 But definitely more of this: 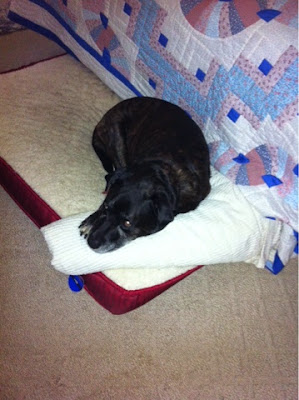 It's good to be a dog these days!

How are you spending these early "dog days" of summer?

Refashioning: Gaucho Pants To A Skirt 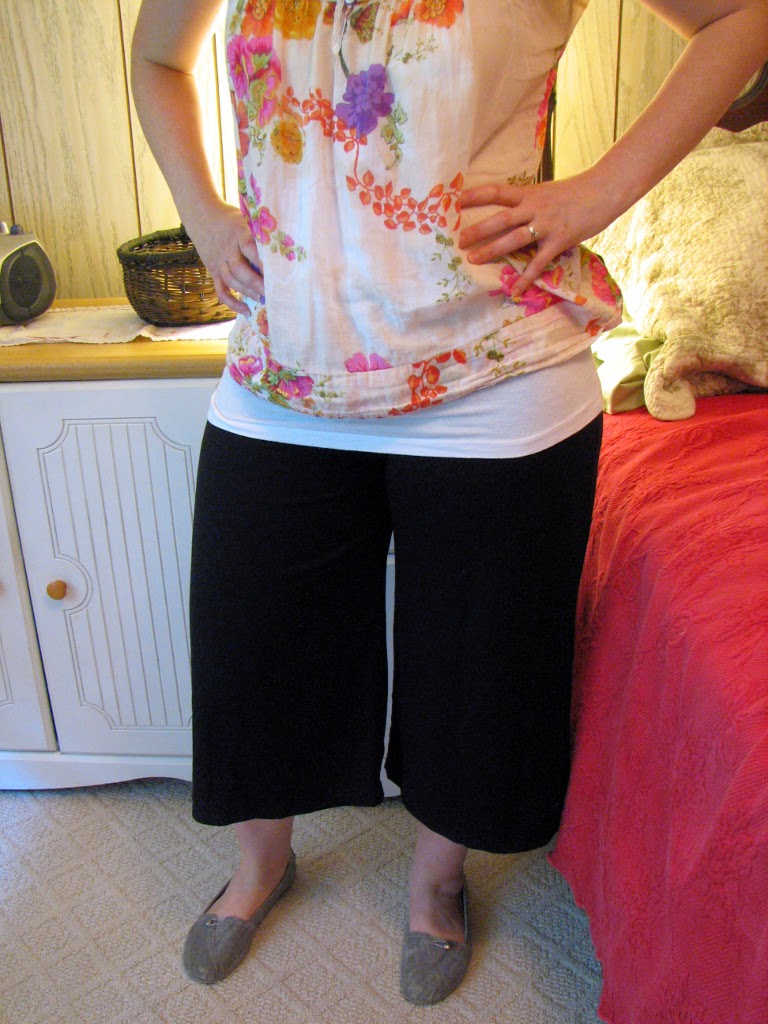 I had two pair of black knit gaucho pants that didn't fit quite right. So I hardly ever wore them.

I've been wanting some new black knit skirts for summer. One day it clicked that I could try turning these pants into skirts.

If it didn't work I really wouldn't be out anything!

I used this tutorial as a starting point. But basically all that was needed for this project was to cut the inside seams of the pants open and then sew them back together. Sew the two front sides to each other and then the same thing with the back pieces. (Consult the tutorial for what to with the triangle shape area from the crotch seam which if not cut and sewn straight will make a weird point/bubble in your seam!) 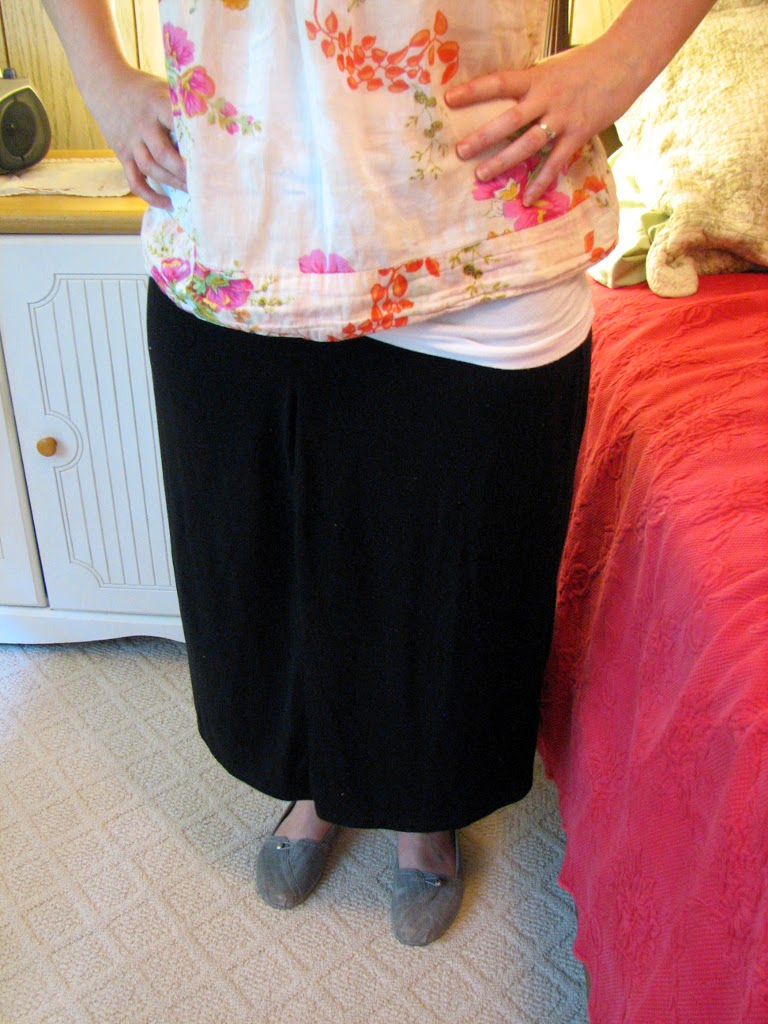 After: A cute skirt!

This is one of those projects that isn't perfect but I love the finished results. Now I have two black knit skirts in my closet which will be so comfy and cool for summer! 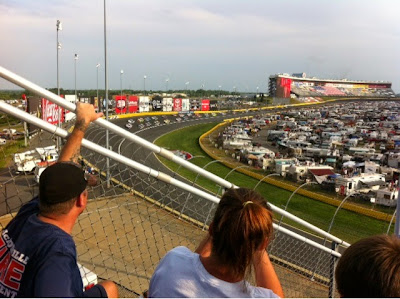 On Memorial weekend, we attended the Coca Cola 600 race at the Charlotte Motor Speedway.

I had bid on and won (which means I got to pay for them, not actually won a prize!) 4 tickets to the race in a silent auction at work. One of the parents at the child development center where I work is on the pit crew for Chip Ganassi Racing. He donated these tickets.

Anyways, I got a really good deal on the tickets and then, when he brought them to me, he had thrown two more tickets in. So we got 6 tickets instead of 4!

We had already invited Andy's parents to go with us since they love racing and then with the 2 extra tickets, we were able to invite 2 more friends! 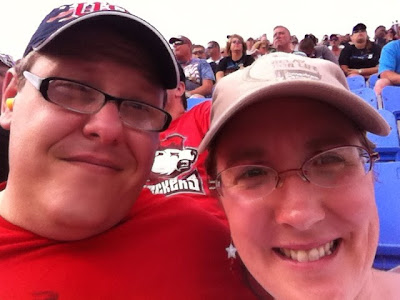 It was really fun!

This was my first race. It was an evening race and the weather was perfect!

Our seats were pretty good--in between turns 3 and 4 and as a bonus were located in the family friendly section which turned out to be really nice-- no alcohol! 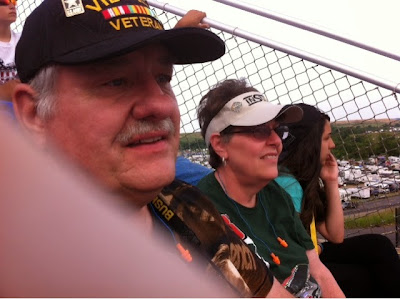 Races are LOUD! We had earplugs, of course, which helped a lot. It was really fun to see the race live rather than on TV. It's a whole different experience. 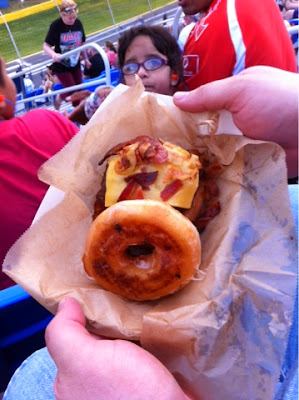 A few years ago, a donut burger made with Krispy Kreme donuts for the bun and then a burger patty, bacon and cheese was featured on Man vs. Food. Ever since then, Andy has wanted to try the Krispy Kreme burger.

Well, he discovered that one concession stand at the race track was selling the Krispy Kreme burger. So we made plans to get one for him. We had to walk a long long ways from our seats  to get to the concession stand and then back again but he says it was worth it!

I tried a bite and it really was pretty good! The sweet of the donut contrasts nicely with the savory burger and of course, bacon goes well with everything!

It was pricey as all food is at these events but it's the only item we purchased there. Race tracks allow guests to carry in small coolers so we took sandwiches,snacks and drinks from home. Plus we had tailgated before the race. The 600 is a long race so we had packed plenty of snacks and drinks! 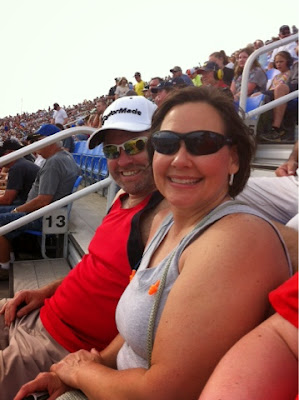 It's been a while since I shared my yard sale finds.

Honestly, I haven't been to that many sales this year and the ones I have attended have had very little that I needed or wanted.

We went to three nearby sales this morning and I found a few cute little treasures! 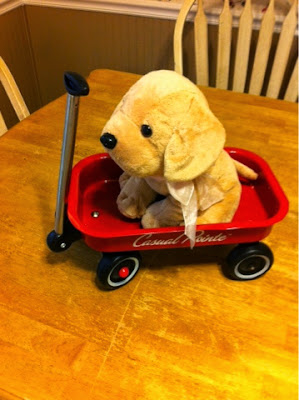 Sale #1:
Stuffed dog: 25 cents
Toy wagon: 50 cents
These were bought for display items for when I set up at craft shows. 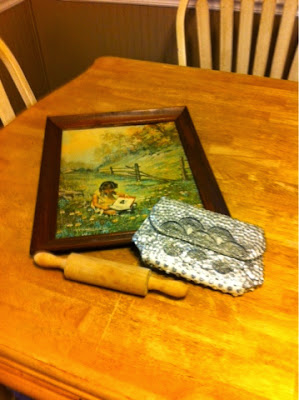 This was an estate sale and had some cute vintage items!

A closer look at the picture: 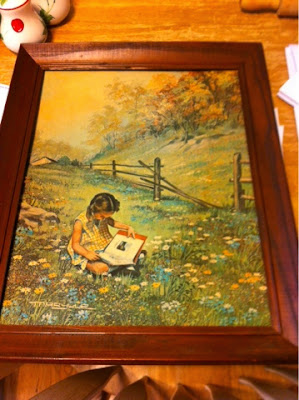 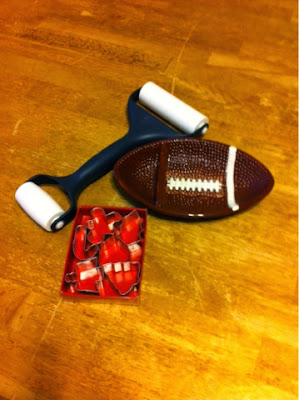 I already have a P.C. pastry roller just like this one and love it! They retail new for $15-$16. I bought this one to resell.

I am a sucker for small kitchen things like the rolling pin and cookie cutters. I don't need them but I like them. Those antique small rolling pins really work and are great for play dough--I have a textured one too!

It was a fun time this morning!

Have you found any thrifty treasures lately?

First Canning of the Season

I made a quick stop at the produce stand yesterday morning and spotted some boxes of very ripe tomatoes for $5.00  a box. 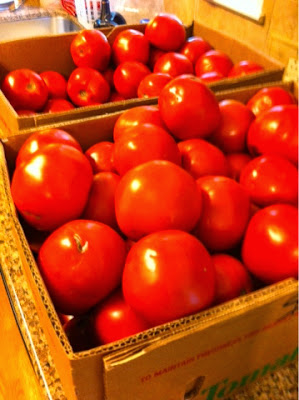 I bought two boxes as they were perfect for canning. One box weighed approximately 33 pounds so I'm estimating that I had about 65 pounds total. 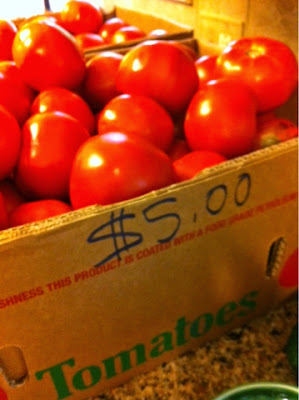 I had to wait to start canning until after work in the evening so once dinner was over, I got started.

Even though canning plain tomatoes in their own juice is very easy, it still takes a block of time to complete. I really wanted to get both boxes canned in one evening even with knowing I would be up really late!

So I plowed through and the last canner full was done at 12:30 am. Thankfully, I had already had time to clean up the kitchen, start the dishwasher and put a load of laundry in the washer, so I just took the jars out of the canner and went to bed! 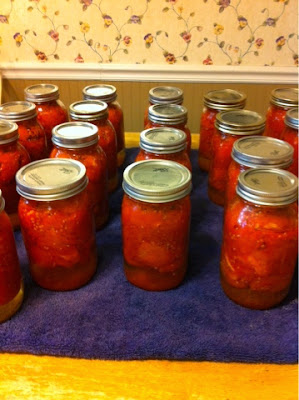