Andy has now finished the 3rd cycle of chemo. He had a much harder time with the 3rd cycle and felt pretty rough for the full three weeks. He caught a bad cough during this cycle and has felt generally very run down.

Due to the cough, Andy wasn't able to finish the last treatment of the 3rd cycle. The chemo drug he would be receiving is known to cause lung issues so the nurse consulted immediately with the doctor as to what they should do. No chemo that day. He was sent to get a chest x-ray and a pulmonary function test. Later that week at a routine appointment with the oncologist, he was ordered to get a CT scan done on his lungs. This was to check for toxicity from the chemo drug. All tests came back clear and show no signs of anything wrong.

They believe the cough is most likely due to a suppressed immune system. He is using cough medicine and it seems to be improving slowly. They gave him this week off from chemo with hopes that his body will recover some.

From what it sounds like, the doctor plans to have him continue with a 4th cycle of chemo. We will find out more details at his appointment on Friday.

Once chemo is finished and he is strong enough to have surgery, he will have some cancerous lymph glands removed. We are hopeful life will return to "normal" by the end of the summer!

We are grateful for the strength the Lord has given us so far as we have traveled this journey and continue to rely on Him. Thank you all for your prayers!
Posted by Mary Ann at 6/21/2017 07:51:00 PM 3 comments: Links to this post

We survived the 2nd cycle of chemo!

There weren't really any surprises this round. Thankfully... Andy handled the treatments very well again. He did get nauseous and threw up a bit once after the first week. This was the day he also ran a low-grade temp which kept crawling up to right below the "call the doctor" threshold. I was grateful when suddenly his temp was back to normal. Praise the Lord!

His white blood cell count was down in the last week of the 1st cycle. It was back to excellent numbers on the first day of the 2nd cycle which was an answer to prayer. This is a very normal part of chemo and seems to happen for Andy on the 3rd week of each cycle so far.

The big reason we did not want the beginning of the 2nd cycle to be delayed was because of an event that was scheduled. Andy has prayed and desired to start a Southern Gospel quartet for many years. In the past year, it has begun to come together. The quartet had their first performance scheduled for last Saturday. (Scheduled before diagnosis.) Had the beginning of the 2nd cycle been delayed a week, he would not have been able to perform. But, he was able and it went very well!

Time flies and now we're almost at the end of cycle 3 as well! He had a rougher time with nausea during the first week of the 3rd cycle. We actually used the at-home nausea meds for the first time.

The first day of cycle 3 landed on Memorial Day so the chemo center was closed. Because the regime Andy is on requires 5 straight days of chemo the first week of the cycle, they sent him to the local hospital for treatment that day. He was in a room in the oncology unit and received the infusions as usual. We were there for 10 1/2 hours instead of the typical 7 hours at the chemo center. We knew going in that it could take a good bit longer  just because of the difference in processes and they might need to keep him overnight if infusions went past a certain time. Thankfully, they didn't and he could come on home that evening! We're grateful that is behind us and hope treatment doesn't fall on another holiday!

He does seem to have caught some kind of chest congestion with lots of coughing. With his immune system being down, this is quite normal but we need to be careful to watch that it doesn't get worse. Our weather could also contribute to this although Andy doesn't usually suffer from seasonal allergies. I know he would appreciate your prayers that this will clear up.

When we first got the diagnosis, the oncologist said there would be three 3-week cycles of chemo. We then switched to another doctor within the same network in order to do chemo treatments close to home. The new doctor says that four 3-week cycles of chemo are protocol for the type and stage of the cancer Andy is dealing with. So the two doctors are discussing whether a 4th cycle is needed. We appreciate the doctors being thorough. The new doctor said he could see why the first doctor only prescribed three cycles but because four cycles is protocol, he wants to be sure and make the best decision. We are praying that they will have great wisdom as they make this decision!

So that, in a nutshell, is how the past few weeks have gone!

And just for fun, I leave you with a picture of our cute little Willie! 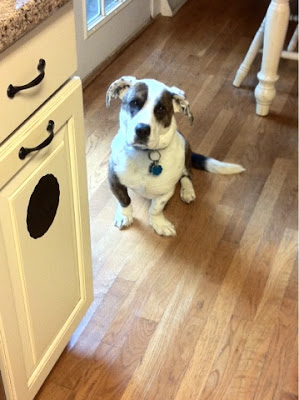